Because I have finished two things!!!!!1

The baby hat is finished! Turns out I can knit an entire baby hat in a week (including time needed to finish spinning the fluff) Aside from one slight hiccup where papa tried putting the hat on upside-down (I think it’s called that? Maybe back to front???), it seems to be well received. 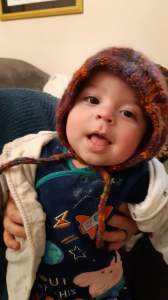 (Picture posted with both parents permission). And as you can see, there’s plenty of room for growing, something I planned for then thought I’d messed up so there wouldn’t be any. Phew!

Not that you can really tell on that picture, but I’m really relieved it’s done! For those new people, this is a thing where every year I come up with a word/phrase of the year and create a hoop of it in some way, so that when I’m a ‘proper’ adult I can hang them all up on a wall. Last year was preparation, and now I’ve got less than 2 months to come up with next year. I’m thinking maybe Ravenclaw, since that’s my Hogwarts house and I’m thinking I want to try a word which I can aim for, if that makes sense. We’ll see…

From spindle to hat

So, after spinning a lot of the fluff from the last post, I decided the time had come. It was time to actually start knitting with my handspun.

So I grabbed a cute pattern, 3mm needles (that was a mistake, apparently I can’t eyeball my yarn thickness yet…) and started. Turns out I don’t have a picture of the ball of yarn I made before knitting, so don’t forget that step! I didn’t however wash the yarn before knitting it (who’s got time for that???)

…and then stop because you run out of yarn. *sigh*

I’m at the last stage of decreases before the icord tie. Grr. Luckily, I still had more fluff to spin! (So much for getting three hats out of this stuff. I would do much better to have gone up one or two needle sizes. I’ll know for the next hat…)

It’s so pretty! And much nicer in person- the problems of taking pictures in Winter. To give you some idea as to how mcuh pre-drafting is needed, have some pictures- one before, one after

Twice the length! And then I’m still stopping to pre-draft more while spinning (does it still get called that then?? It’s different to drafting while spinning, so I guess so?).

Knitting with my handspun is a fascinating experience of what I thought was really obvious thick and thin bits aren’t registering, but there are some times I’m having to draft lumps out and coax twist around. I can see that continuing to do so will really enhance my spinning (who’d’ve thunk really???). I’m excited to do more now!

Anyway, I’ve got to get back to this spinning! I’m hoping to finish this batt before I finish the baby hat, otherwise it’ll never get done! There’s so much other stuff to tell you about, I just need to find the time…

Kicking lifes arse, one stitch at a time

Vix Knits... and crochets and sews...

Tales about a creative life on Dartmoor