Because I have finished two things!!!!!1

The baby hat is finished! Turns out I can knit an entire baby hat in a week (including time needed to finish spinning the fluff) Aside from one slight hiccup where papa tried putting the hat on upside-down (I think it’s called that? Maybe back to front???), it seems to be well received.

(Picture posted with both parents permission). And as you can see, there’s plenty of room for growing, something I planned for then thought I’d messed up so there wouldn’t be any. Phew! 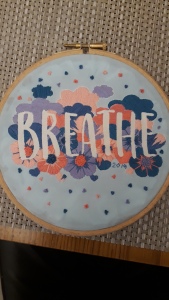 Not that you can really tell on that picture, but I’m really relieved it’s done! For those new people, this is a thing where every year I come up with a word/phrase of the year and create a hoop of it in some way, so that when I’m a ‘proper’ adult I can hang them all up on a wall. Last year was preparation, and now I’ve got less than 2 months to come up with next year. I’m thinking maybe Ravenclaw, since that’s my Hogwarts house and I’m thinking I want to try a word which I can aim for, if that makes sense. We’ll see…

Jacob and Florian, I love you very much but please don’t read this post 😉

Ok, now that’s done, I can show everyone else—Jacob, go!—the super secret thing I had approximately one week to make over Christmas because I don’t own a sewing machine.

Baby quilt!!!!!!!!! It’s a bit brighter and more colourful in real life, and I love it. I had to do it over Christmas because I don’t have a sewing machine so I had to use my mum’s (she has said that I can have her Juki when I move somewhere I will have the space for it 😀 )

Now I have to send it off to get quilted, which I’ll look into when I’m back in Bristol. Any recomendations for UK quilters/things I should be looking for/anything I should avoid??? IT’s all very new and slightly scary because this baby is important so I want to get it right.