So, we’re a little less than 2 weeks into 2014, and since this is as far as I’ve got with the cat alphabet, I’m guessing that my plan of doing a letter in two weeks is a tad optimistic!

I haven’t got much to do left on him, just his ears and then all the backstitching, I think. It’s just that I was kinda sidetracked by Susan, and all my maths work and things, so just having this as a WIP may be better, rather than stressing out about it 🙂

Speaking of Susan, here she is so far

Front and back top. You can just about see the detailing on the front of the piece, on the right of this photo 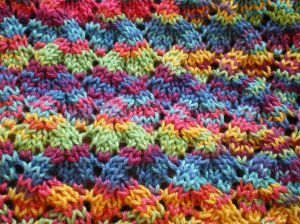 Close up of the lace detailing on the main body

The pattern is called Lucy, and was published in a Let’s Knit, several years ago. It’s knit in a sport-weight yarn, and is supposed to be done in a plain colour! But as we all know, boring plain colours are, well, boring! So I’m using a very variegated yarn, and I think it works out well together 🙂

I’m having a bit of a love affair with Susan right now- my January plan was etsy things, and so I’ve decided to swap January and February’s ‘aims’ around a bit, so January is for summer things, which Susan fits into nicely, and February will be for the Christmas market here in York. I think that will be a more sensible plan, rather than diving into etsy. I know, I know, I’m just putting off opening an etsy shop, but hey ho.