So, October’s Block. It’s another ‘classic’ fairy tale, published by the Grimm brothers, and one that I think will be obvious by just a few clues. so…

It starts with a lovely man marrying again, and his new wife and her two daughters bullying his rather more lovely daughter(the main character). She (the main character) meets the prince for a few hours, and leaves an item of clothing behind which prompts a massive search of the entire city to find her again, because naturally in a few hours you can fall totally in love with someone…gotta love those fairy tales!

I think that’s enough information to be getting on with, if it really is more obscure than that I’ll give out some more hints next week (or maybe a pic of the finished thing!) It’s quite awkward to know how much information to give from the side of knowing what the fairly tale is!

So, onto the other half of this post, yes, the Christmas presents are nearly finished! I finished all the coasters! Here’re the ones you didn’t see last time

I just love that tit in the bird bath!

So that makes two of the three Christmas presents I’m hand-making finished! And I even made a start on the last one- a set of form-a-line cards.

You make these by punching holes in the middle of a tri-fold card (so you can cover the back, which gets a bit messy with selotape!) 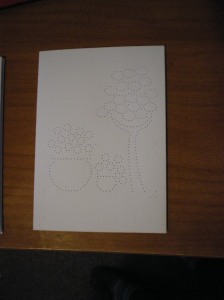 There are patterns you print off and tape over the card, then you use a pin to punch the hole (into a block of foam!). It gets a little painful after a while, that’s a lot of holes, especially when you decide to be completely insane and punch 10 cards in one day! They’re not all of this pattern, there are three patterns in total, and I did 3-3-4.

They really are loads of fun to do (when you’re finger stops hurting from sticking a pin through card so many times!)