Update of all the things!

Naturally, the only thing to do upon finishing two things is immediately start more things! Three to be precise.

Firstly: more socks. See, I didn’t have a portable project, since my mother’s socks require two balls of yarn and a book for the charts. Therefore, I needed a new pair of socks, preferably ones with a basic or non-existent pattern. These socks fitted the bill, and I had a great time starting them (I’ve modified the pattern somewhat):

Secondly: my handspun stripy colourwork scarf. I decided it was time to start. And now I’ve done a bit, I need to start over, I want 27 stitches (25 for the colourwork patterns, 1 stitch either end), and I’m also thinking that I don’t want to pair the blue with the yellow… I’m also thinking that my handspun is wayyyyyy too overspun/plied, but I can’t exactly frog and respin yarn… 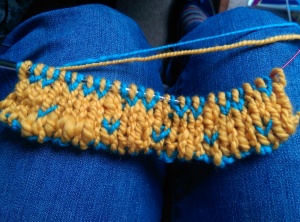 Thirdly (and most impressively): new cross stitch. After I finished the wolf, naturally I had to make a start on the next cross stitch on my to-do list. This currently has…not an insignificant number of hours in it. I’m currently in the ‘ooh, new start, fun’ mentality of it, and it’s lovely to stitch whilst ‘watching’ the commonwealth games, so it’s getting a lot of attention at the moment. 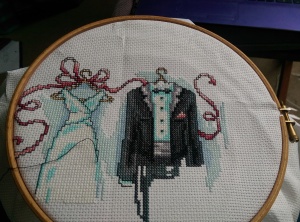 This new start will eventually become this: 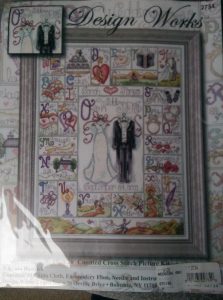 As well as all this, I also finish-finished the wolf cross stitch. After two failed hunts, I found the perfect frame in TK Maxx! So yay me! 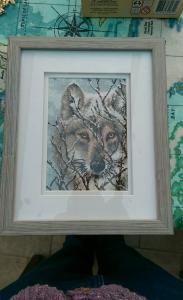 Another month gone…where are they going??? So, before I get inot the goals, firstly I want to show off my new finished things.

Socks! Who doesn’t love socks? This pic is of them drying after they’ve been worn for the first time, because I had to wear them straight away!

This pair have afterthought heels, which I really dislike because of the kitchener stitch…

And secondly, another sewn card! (Note: I say another…it’s been quite a while since the last one I did. These are done by punching holes in the card with a large stabby needle, then sewing them in a set pattern with a smaller needle and metallic thread. The companies which produce the cards are form-a-lines (for the A6 size) and…I thought there was a sister company for square cards but I can’t find them again so maybe I imagined it or something…) 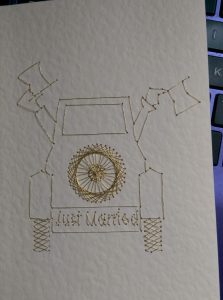 This is for a couple I know who are getting married in April. I had to change the pattern slightly so that both hands are holding top hats- in the original design the hand on the right had a handkercheif. I’m very pleased how this came out in the end.

Finally: a bird! This is a generic one done to see how large they are when finished- I think it might be a smidge too large for the planned use, so I’ll have to go down to embroidary thread and *very* small knitting needles (1mm I’m thinking) 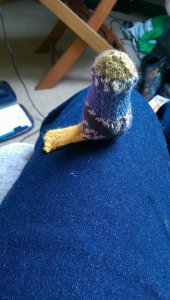 So, the March goals I had:

1) Finish my mother’s first pair of socks. Done! The ends are even woven in, that’s how done they are:) 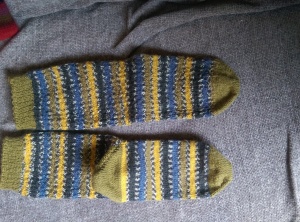 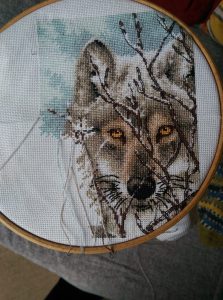 4) Get gauge on cockatoo brae. Done! Sleeves are half(ish) done! More up to date picture of sleeves so far: 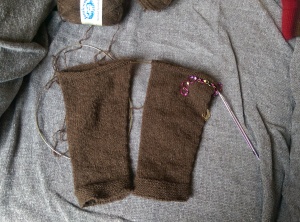 5) Stick all my sock yarn (not the stuff for project bird socks) on ravelry and find projects for them. Done! See my ravelry account. (Link opens to my stash page filtered to only include yarn with projects associate with it in a new tab). Obviously, this isn’t all my stash, but it’s all my sock yarn here in Bristol. Bonus: I actually also added all my yarn here in Bristol (including my handspun, although I’m not convinced I’ve done that bit correctly…), and found patterns for almost all of it (including my mothers bird socks). This brings me to a total of 28 projects in my queue, of which 26 are socks…

So, next months goals.. 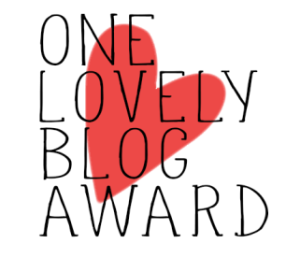 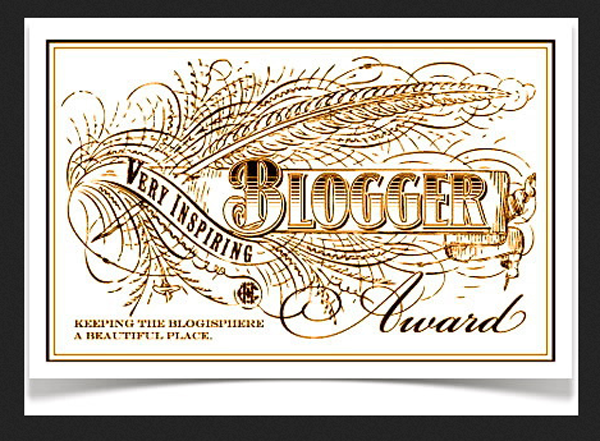