…so let’s get on with the presents, shall we? The scarf has now been blocked, so looks rather more appetizing than the pile of knitting it was last week!!! The bit which is pulled in is because there are some cables in it, so it’s a lot tighter than the other section. I think that if I do it again (and I’m very tempted), I’ll skip that section.

The hat has also been proceeding apace. The twisted rib was surprisingly alright (I suspect the size of the needles might have played a part with that!) and the body of the hat has now been started, and is racing along. Which I am slightly alarmed by as I was rather hoping to be knitting it on the train on Thursday…it may not last that long. Alternative ideas, anyone??? (Something other than socks???)(and not the other Christmas present) (Or the scrappy blanket for that matter)hmm, maybe a double sided blanket…(knit in squares, don’t worry, I’m not that insane…)

I currently have three projects on the needles right now. Firstly that lace hat, with 3mm needles. I also have a pair of socks on the needles(2mm), and my scrappy blanket(1.5mm). I am rather amused that the thinnest yarn gets the largest needles!

I’ve also been steaming along on my scrappy blanket. I’m loving it, although it is getting a little heavy these days 🙂 That’s what comes of knitting it on 1.5mm needles, I guess!

I finally figured something out the other day, which I thought was worth sharing with you all (aren’t I lovely? ). This pattern involves picking up stitches, which is all well and good until you realise that picking up the second stitch (which is nice and easy to see before you start picking stitches up…) becomes rather difficult as it tries to hide (it’s involved in a k2tog on the first row, so you can’t really blame it, I guess!). BUT, if you stick your darning needle in the stitch before you start picking stitches up, it can’t hide anywhere! I figured I was a genius when I realised this! 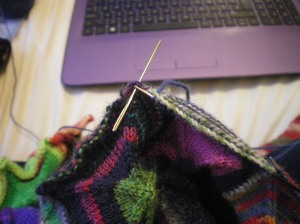 I’m planning on doing one more stripe to add to the blanket, then calling it done (it’s not as though I won’t keep adding random hexagons at odd times just because 🙂 ). I’m also thinking about my next scrappy blanket, which may or may not involve me dipping my proverbial toe into pattern creating waters… Wish me luck!(But is going to need my 2mm needles, so I’m going to have to finish my socks before I can start, and then not start more socks…maybe I just need more 2mm knitting needles…)