I has a cunning plan…

Ok, so my mum finally got to open her birthday presents (her birthday was yesterday, but I’d finished her things quite a while ago, so I could drop them off when I went home, rather than posting them!), and she now apparently can’t wait till the Winter. Personally, I want it to stay nice and warm for as long as possible 🙂 (Although I have recently had about a foot of hair taken off to cool my head down!)

I managed to complete 2 more tetris shapes this week…I thought it was more like one and a half, until I looked back at last week’s post and realized that I hadn’t started the colour of the pink shape in the bottom middle. This blog is really useful! 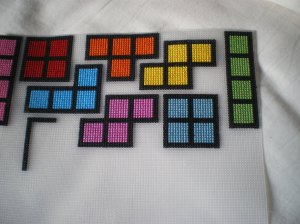 I have got to stop procrastinating on this… I kinda like working on it, but it gets a bit boring after a while, so I keep putting it down to play computer games…

The only thing you can’t really see is the bottom dividing line ready for the next three months. Hopefully, this weekend I can finish the right border to the same spot as the left, and fill in the title. Then I can roll it up a bit and not have to roll back down! I think it’s do-able, especially seeing how hot it’s going to be getting!

So, my cunning plan: I said, back when I won Wisher‘s giveaway (back in May!) that I would hold my own giveaway when I got my tax return, and then promptly forgot…so, I thought that from now to the end of December, I would do something like fallfromgrace did when she did her kings and queens cross stitch, and give out a little bit of information about the current month, and at the end of year put everyone who joined in into a (proverbial) hat and draw out a couple of winner. It won’t be based on the number of correct guesses, because as soon as I get the pattern, and know the fairy tale, it pops up all over the place with other people who are stitching it and things!

This was originally written by Hans Cristian Anderson, and therefore is a happy one, as opposed to any written by the Grimn brothers! It’s about a woman who runs away from one marriage to a rather nasty character, decides to not marry another character because of where she would end up living, and eventually found someone her own (rather unusual) size to marry! Happily ever after, naturally!

I’ll end this one in a couple of weeks, and post August’s late, so they aren’t running at the same time, and then theoretically be up to date for September onwards! Naturally, as my cross stitch gets done and posted up here, it might be easier to figure out what’s what- it all depends on how quickly it gets stitched!