So, having finished my bedroom desk project, it’s now time to start a new one!

And what better thing to do than un-earth an ancient UFO and give it some more TLC? (By ancient: the last time I showed progress on this cross stitch was April 2015!!! Has anyone here even followed me for that long???)

But here it is: Stained Glass (round of applause please!)

This was originally designed as a SAL, judging from the layout of the pattern I have, but I doubt very much that I ever even attempted to keep up with it! Then we got the last 4 pages all together because the shop was shutting down. I still have a few other patterns from LoveThy Thread to do…*whistles innocently*! Maybe when this one gets done!

There is also a second half to this post, because I promised MrsCraft more stash acquisition photos (and because I rather maughtily started a new project…). When I bought the buttons which will hopefully be used for my cardigan, my mum suggested I pop upstairs to have a look at the sock yarn. How could I say no to such an offer???

So, naturally, I bought some sock yarn. Two zauberballs, and a skein of Head over Heels (Stylecraft). 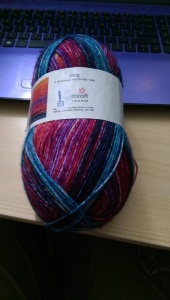 And then, when I got the zauberballs home, one of them jumped stright onto my needles (after glancing through my sock books and settling rather forcibly on a pattern). And really, who am I to say no to such an insistend baby pair of socks??? (These are now being called fish socks for reasons I have yet to figure…)

The head over heels yarn may or may not become the reindeer cowl from twistedyarn…I am as yet completely undecided about that. It’s a very pretty pattern, but I already have one cowl I pretty much wear all the time and I’m not sure that I’d ever use it. We’ll see. At the moment it’s content to sit on my desk and be petted every once in a while!